In recent times , ITS Ltd has been receiving more and more requests for traffic analysis from video collected using drone cameras. While the usage of drone video for traffic monitoring is still relatively new, it is even more novel for video-based analytics purposes. Hence, it comes with its own set of advantages, limitations, and considerations. We hope this will help practitioners better determine when this collection method is most appropriate.

Less cameras required:
In mid-2020, we received a request to collect video at a town square in Co. Cork. Our client wished to understand the behavior of vulnerable road users and the interactions with traffic in the area. Given the typical traffic camera video quality, video processing from a camera installed on a pole is limited to about 30-50 meters in distance. Since this area measured about 180 x 50 meters, they would have required a total of ten cameras each in order to cover most of the areas of interest (Figure 1). However, one drone camera was all it took to cover all areas of interest, including all approaches. 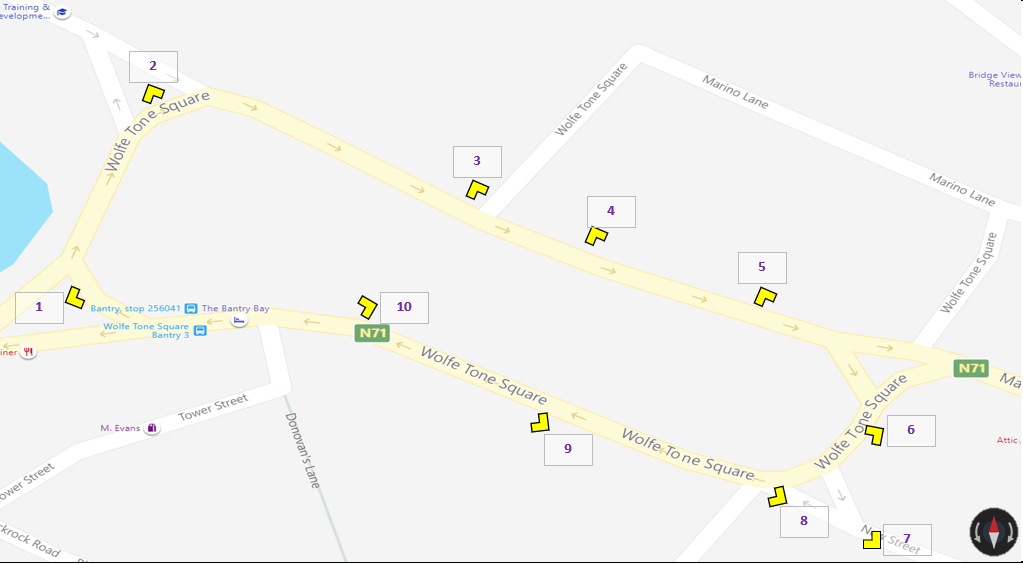 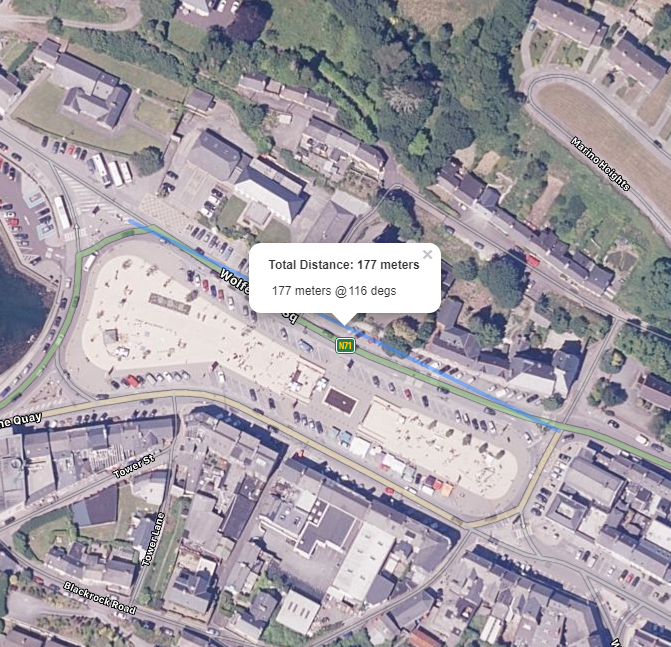 Not only did the area mentioned above require ten traditional cameras each, but we also ran into the problem of having nowhere to install the cameras. Typically for temporary installations, cameras are attached to public infrastructure, such as light poles at or near the road segment of interest (the typical set up is shown in Figure 2). This poses a challenge for several reasons. Sometimes, there are simply no poles to mount these cameras on to, which limits the possible locations to deploy at. Even when there is a pole, they might not be high enough (at least 4.5-6 meters) or located close enough to the study zone to offer the best field of view. 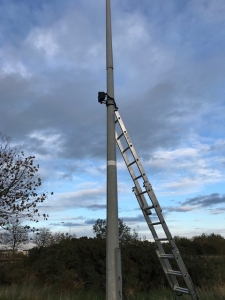 Often, due to poor video quality and or infrastructure limitations, study areas can be limited to the intersection only. This means that little data beyond that of road user movements within and immediately around intersection points are provided. Since drones have a much wider field of view, it means we have potential to provide much more contextual data. For example, metrics on how vehicles are behaving before entering the intersection, or upon leaving the crosswalk. Having a wider coverage area simply means more useful traffic data! Figure 3 displays the final setup with drone video in Co Cork. 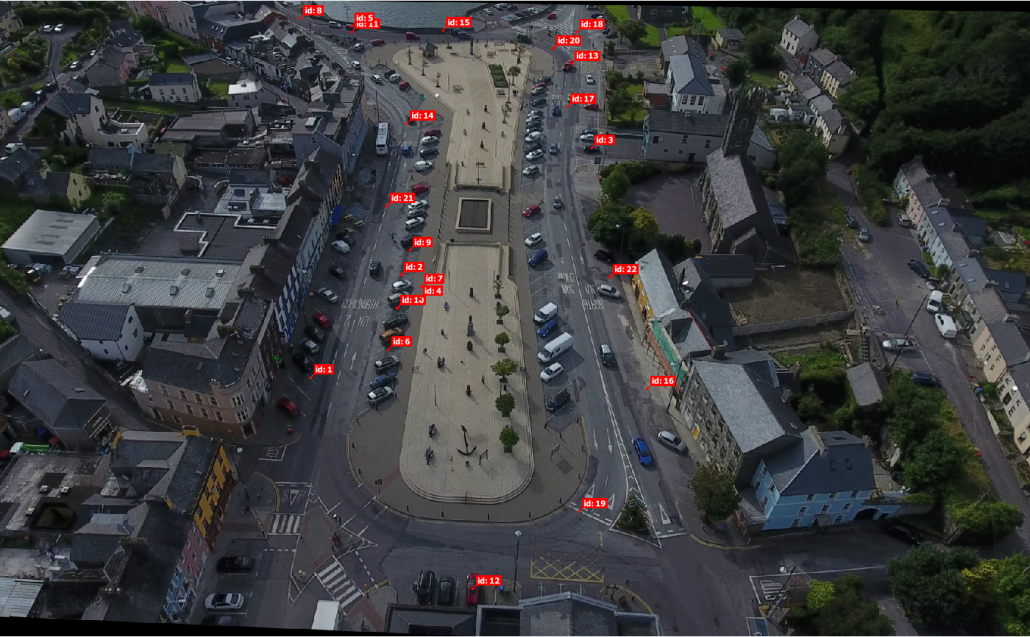 The use of drone video allows us to get around the constraints that sometimes come with fixed cameras.  Using drone video for this project in Co. Cork allowed for the whole town square to be within view of just a single drone camera. This significantly simplified the project scope and camera set up and lowered the cost and time of video collection and processing.

Coverage no matter where:

Since collecting with drone video eliminates the need for nearby poles, it allows for the possibility of collecting video at locations like car parks, motorways, bridges, or pedestrianised locations with no nearby poles.

Counting cars using traffic cameras has been around for quite some time. Since counting cars doesn’t require high resolution, these cameras are not always well suited for detecting and tracking varying types of road users from afar. However, drone video quality is extremely high, not only making the detection and tracking of all road users easier, but also nicer to look at, and easier to review. Figure 5 displays the same road segment covered by a typical traffic camera vs. a drone. 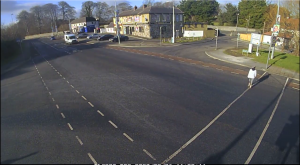 Figure 5. Road coverage using a standard camera (above) vs. drone video (below) in Dublin

Availability and affordability:
Collecting drone video is still new, and not all video collectors across all geographical areas offer drones.  In addition, in cases where the usage of drone is substituting the use of a single fixed camera, the costs are generally more expensive. However, assuming the availability is there, drone collection is almost always more financially beneficial in situations where a drone is replacing a two- to four- fixed camera setup.

Another challenge is the short battery life of drones. Drone batteries generally do not last more than 20 to 30 minutes. In theory, this makes it impossible to get continuous video from a single drone for the duration required for a typical automated road safety study (12 to 24 hours). However, this challenge is easily overcome by using two drones during the same collection period – one drone replaces the other while it charges. These two drones are constantly interchanged (using set coordinates) throughout the video collection period, providing seemingly continuous video footage.

Other emerging options are to deploy tethered drones which can allow for extended flight periods. But this option will not always be feasible given the survey environment, pilot fatigue and video storage complications!

Weather can put a damper on video collection:

Since drones are air bound, they are highly affected by weather conditions. Strong winds may cause the drone to either drift or completely rotate its field of view. High winds ensure the drone has to work harder to remain in a static location, thus depleting battery reserves at a faster rate. To avoid this, weather conditions should be considered when selecting the date of video collection.

Temporary fixed cameras can be installed and generally left unattended, (apart from a potential battery or memory card change), drone video, however, requires the constant presence of an operator. This increases the amount of effort required to collect video footage continuously. On average, it is generally possible to collect between three to six hours of video footage per day. While this may be a concern when more hours are required to obtain statistically significant data, drone footage is usually used to cover a large stretch of land, meaning that volumes are high, and that less video footage is required.

The usage of drone footage is not ideal at night. This is due to multiple factors, including safety and permits. Additionally, lighting conditions play an important factor. Keeping in mind that drone footage is a great substitute for locations without poles (namely light poles), this means that some of these locations are not illuminated at night, and thus the footage could be too dark to produce reliable results. Video collection hours should therefore be selected such that natural light is available. 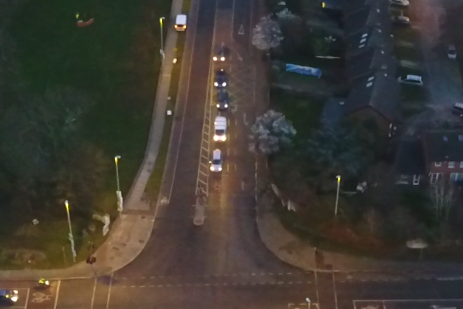 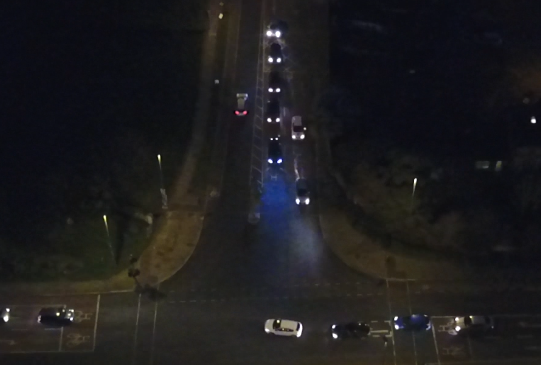 Again, with the usage of drone video being relatively new, rules and regulations are still evolving.

Now In the EU, the European Union Aviation Safety Agency (EASA) is the EU agency responsible for issuing aviation regulation. These new EU drone regulations apply to all EU member states (plus Switzerland, Norway and Iceland) and harmonizes drone rules across the entire member body. A certificate or approval issued in one member state will be valid in another.

With 5 regulations to date the most important to note are certainly:

Before the location of interest is selected, one must ensure that all the regulations and rules are met for that location. As much good preparation as possible ensures a safe and successful flight. Generally, this should not pose a problem and as a reputable video collector & ITS should be able to provide you with the necessary permits and permissions.

Overall, drone collection is becoming increasingly common, and it certainly has its advantages. For certain projects, drone collection should be considered as a potential method of video data collection. On our side, we are keeping up with the evolution of the industry. Definitely watch this space and we look forward to making a contribution to Drone Data Collection.